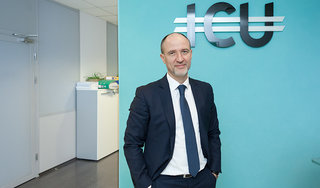 NON-GOVERNMENTAL PENSION FUNDS. YES OR NO

What could happen during the last fifteen years since the system of non-state pension funds was launched in Ukraine that now one of its creators is urging to destroy its product?

These words, used as a foreword to the report, serve to demonstrate how the research sample can significantly skew the findings. To make the right conclusions, you need not only to see the big picture, but also the reasons that have led the system to its current state.

Experts believe there are the following key reasons to stop what they believe to be an unsuccessful experiment to launch the non-governmental pension system:

The authors believe that the use of the pension system in its current form as a basis for the launch of the mandatory pension savings plans makes little sense and would lead to the mistakes already made by other Eastern European countries, such as Poland and Hungary.

The draft law of Ukraine “On the Mandatory Fully Funded Pension Plan” takes into account a number of factors that led to reconsideration of pension system parameters in other countries (adequacy of contributions, decentralization of the management system, reduction of expenses and options to invest outside Ukraine). However, it does not make the future system more resistant to systemic crises or political influence. We need to dig deeper.

Why Have NGPFs Not Become Widespread?

When we see an announcement that there is no water in our house, we run to the store to buy some. But you probably won’t run anywhere to take care of your pension in Ukraine because you are told that there is no reason to run.

Most pension-related reforms have been implemented either on the wave of general social and political changes, including those in Eastern Europe and Baltic states, or as a result of problems of funding existing pension systems, which is typical of Latin American and post-Soviet countries.

The changes were made by authorities that formulate social policies. One of the reasons for successful pension system reform in the UK, which is described in the project report, was the fact that the need for changes in the pension system, which was running a risk of collapse, was correctly communicated to the general public. A clear public stance of David Cameron’s government contributed to positive perception of the reforms.

Ukrainian politicians, on the other hand, communicate that you don’t need to think about your future in Ukraine. “The pay-as-you-go system has been through every challenge and will guarantee you your pension in any situation” – is the message officials working in the social sector deliver on TV and in the newspapers.

It is hard to blame private pension funds for the public distrust in a country where there is little trust in the financial sector overall. Especially when politicians themselves undermine the credibility of this tool.

However, the period of 2013-2018 had the highest inflation rates in the entire history of existence of pension funds in Ukraine (chart 1). 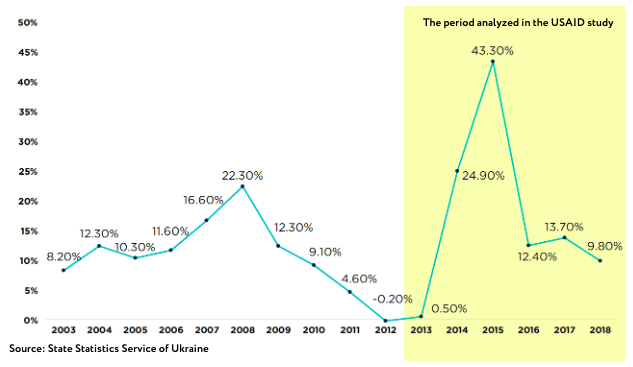 If we look at the results of non-governmental pension funds over a longer period, they look as follows:

Table 1. The number of NGPF and their assets compared to inflation since 2009

The table takes into account NGPF that were active as of 31 December 2018. Profit margins are calculated for full years of functioning.

The project report demonstrates that only one fund (with only 2% of assets on the NGPF market) managed to beat inflation between 2014 and 2018. At the same time, if we look at a three-year period (2016 to 2018), the share of such funds constitutes 29% of the total number and they account for 85% of assets in the system.

What conclusion can we make? Measuring the average does not show us the real picture of the NGPF market. The system of those funds is too variegated. It includes current funds and funds that are “waiting for a better time,” funds that have suspended their activity, funds created for the employees of one specific company and funds designed for sale. It is hard to make any conclusions on the system as a whole.

We believe that a way to analyze the profitability of such funds in more realistic terms would be selective analysis of the activity of open public funds with at least UAH 10 million in assets (see chart 2). 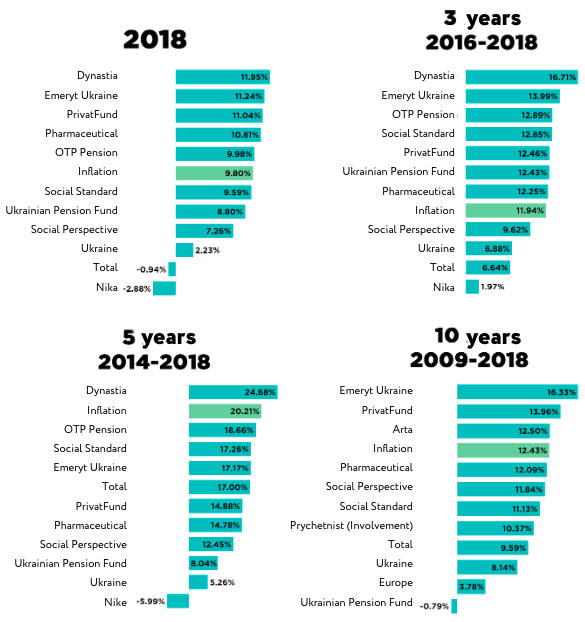 One of the main factors that have a negative impact on the results of NGPF activity is the scarcity of investment options available to pension funds. As of today, NGPF invest primarily into fixed-interest instruments — deposits and bonds constitute 92.8% of the investment portfolio of Ukrainian NGPFs (as of the beginning of 2019).

This situation is telling not about low effectiveness of NGPF management, but rather of inferior development of the Ukrainian capital market. Besides, by February 2019 there were capital controls prohibiting pension funds from investing outside of Ukraine.

Despite this, the results of the top 10 funds by the asset value look quite adequate. Detailed information on yields of all pension funds can be found in the table.

Why is it expensive?

According to the report by the National Commission for Financial Services, in 2018 NGPF expenses constituted UAH 55.7 million (on average, 2.14% of NGPF assets per year). Without taking into account the NBU pension fund, the expenses of the remaining ones constitute an average of 4% per year.

Pension funds service fees vary a lot, thus the experts of the “Financial Sector Transformation” project pose questions to the logic of their formation. For instance, administrative expenses alone (managing the participants, bookkeeping and tax accounting) among the studied funds varied from 0.36% to 3.46% in 2017.

It is important to understand how the fees vary by type of fund (open, corporate or professional).

It is simple with open funds — a fund participant makes contributions personally as a private individual. Given they are interested in engaging as many people as possible, the key task of open NGPFs is to provide higher yield compared to other alternative investment tools, mainly bank deposits.

For service companies to break even, system expenses will tend towards the maximum legislative threshold — 7% (see chart 3). This is connected with (1) high license requirements to professional participants — asset management companies, administrators and custodian banks, and (2) small amounts of NGPF assets in Ukraine. The total assets of all non-governmental funds as of the beginning of 2019 constituted just UAH 2,742.5 million, or about USD 100 million. As chart 3 demonstrates, NGPF expenses mostly fall between 3% and 7%. Getting the fees below 3%, taking into account provisional fixed expenses of UAH 3 million, will be possible after a fund exceeds UAH 100 million in assets. In fact, the funds that achieved this threshold reviewed their fees in 2019. There are just six such funds in Ukraine out of the 62 registered funds.

In corporate and professional funds created by employers or labor unions contributions and services are managed by the employer or associated companies. This enables the employer to establish any remuneration rate for service companies below the 7% threshold enforced by the regulator. The employer can either cover some of the expenses from other sources of income, or fund other activities by the income generated by NGPF activities.

For instance, the expenses for servicing a corporate pension fund of Ukreksimbank constituted UAH 1.89 million in 2018, or 0.84% of its assets, and the figure for the NGPF of the energy workers labor union of Ukraine was UAH 5.31 million, or 6% of the fund’s assets. Of the four Ukrainian NGPFs with the expense rate less than 1%, three are corporate funds providing management and administration services partly or fully at the cost of the founder/employer (NBU, Ukreksimbank, Ukrainian Pension Foundation) and one fund which is not actually active (First Oil and Gas NGPF). For participants of such funds, the main criterion of effectiveness of pension programs is not the NGPF yield but rather contributions made by their employer.

Chart 3. Correlation between NGPF expenses and their asset value in Ukraine, 2018 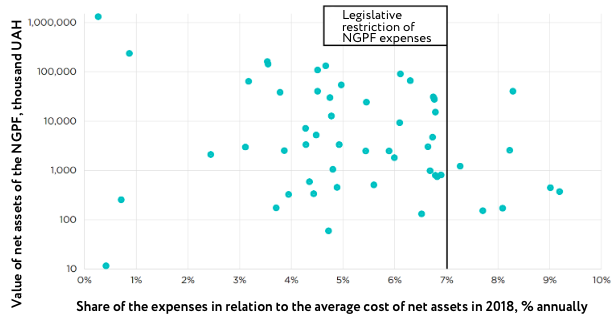 Why is “everything so grim”?

Narrow outreach of NGPFs, low trust to them and inferior results are not characteristics of NGPFs as a tool but a reflection of economic and political conditions in which they function. The absence of major scandals and financial meltdowns, in contrast to the banking sector, tells about the stability of these financial institutions. What is the real reason behind the criticism and the suggestions to close the funds and “give the money back”?

Perhaps, the reason is that the existing NGPFs do not fit well with the new concept of the pension reform considered by the World Bank. The model that the draft law on pensions entails stipulates the creation of the governmental pension fund. Economies of scale allow to reduce the administration and management fees of such a fund. The projected fees of 0.6% are not commensurable with the 3.5% level foreseen for NGPFs participating in the fully funded plan.

The 3.5% restriction is clearly too high. When the mandatory second pillar of the pension system is launched, the assets of the fully funded part of the pension system will grow by dozens of times, because all the working population will be effectively engaged in the system. The high threshold for administrative fees jeopardizes efficiency of pension funds thus reducing yield on savings.

At the same time, creation of monopolistic government institutions in countries with weak democracy and economy carries much greater risks of inefficient use of funds and corruption.

A recent example is Kazakhstan. To increase management efficiency, ten non-governmental pension funds were merged with the government-owned one in 2013. Supporters of this policy claimed that it would help to save money on administrative expenses. In the new model, the National Bank of Kazakhstan (NBK) played the role of a custodian bank, and the fund itself was an asset management company. Later, this role, too, was taken over by the NBK despite the warnings about the conflict of interest. At the beginning of 2017, the value of assets in the system reached USD 20 billion or 15% of the GDP. In that same year, the former head of the government fully funded pension fund and his deputy were accused of embezzlement and bribery. 23% of the assets turned out to have been invested into failing securities (with the rating lower than the investment one) — not to mention the USD 250 million loss from investment into bonds of a pre-default Azerbaijani bank.

In the Ukrainian situation, a more reliable version of the pension reform implementation would be preservation of the decentralized pension system with admission of existing and new pension funds to the market, including foreign ones. At the same time, the threshold for participation fees should be lowered. For developing countries at the start of the reform, a fee of 1.5% could be a reasonable benchmark. It corresponds to the level of Eastern European countries that have commensurable assets with the ones of the future Ukrainian system (chart 4).

Chart 4. Expenses of fully funded pension systems worldwide depending on their size. 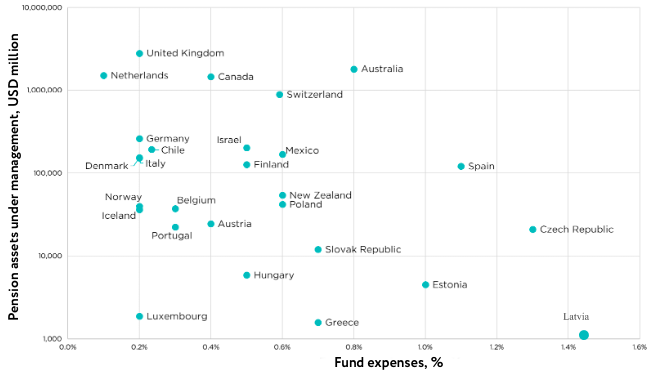