The US economy, fiscal stimulus, trade protectionism, and perceived worries

2 April 2018
Here, we provide our view on the recent worries in the global financial markets over the initiatives of the US government, namely, fiscal stimulus and import tariffs. We conclude that the US Dollar Index (DXY) is still bound for a gradual decrease. In 1Q18, the financial markets’ view on the US economy has so far been impacted by two factors (1) the debate over fiscal stimulus that incorporates ...

Here, we provide our view on the recent worries in the global financial markets over the initiatives of the US government, namely, fiscal stimulus and import tariffs. We conclude that the US Dollar Index (DXY) is still bound for a gradual decrease.

In 1Q18, the financial markets’ view on the US economy has so far been impacted by two factors (1) the debate over fiscal stimulus that incorporates tax cuts and an increase in expenditures; and (2) the debate on import tariffs. The latter has been interpreted by the media as adding up to “trade wars” with surplus countries.

Over the first issue—the fiscal stimulus—the market’s concerns have so far been about: (1) the possibility of the economy overheating amid “full employment;” and (2) “twin deficits,” in which an increase in fiscal deficit would in turn increase the trade deficit further. On the second issue—the import tariffs—the concerns have been centered on: (1) retaliation by US trade partners and resulting risks to the entire international trade architecture; and (2) a comment by a former senior White House staffer about a “twin deficits” causation that goes from trade balance to fiscal balance,[1] where the primary concern is “national debt” of the US.

In our view, the “full employment” view seems to underestimate the broader unemployment measurements (such as those working part-time), as sluggish wage growth (running about 2.5% YoY, and low compared to historical YoY increases) incentivises (see left-hand side of Chart 1) employers to tap the pool of partially employed as well as unemployed. Alongside of this, there is the usual inflation scares: if higher-than-expected inflation materialises, then the Fed would react by enacting a more aggressive rate hike. However, the Fed itself projects that its 2% target will be hit by its preferred inflation metric the PCE (personal consumption expenditures) index, which is now at 1.7%, and its core component at 1.5%. At the same time, there is a visible and substantial debt load on households alongside a personal saving rate at a near historical low (see both left- and right-hand sides of Chart 1).

Hence, we draw the following conclusions: there is still slack in the US labour market, and given the still elevated personal indebtedness and still historically low personal saving rate (and with steady real GDP growth, these metrics are likely to remain strained, as personal finances are more skewed to debt than to positive wage-based consumption), the Fed’s interest rate increases are more likely to be paused by year-end 2018 or mid-2019 than be continued for several more years..

Regarding the “twin deficits” concerns mentioned above, there is much more left unsaid on this view. It is not only about causation, be it the fiscal deficit causing a trade deficit or otherwise. There is at least one important point to make: the proper way to look at the issue is via a sectoral balances identity,[2] which says that the domestic private sector balance should be taken into account where government and external deficits are considered,[3] This helps explain the relationship between the three balances; however, there is no straightforward causation in which one (im)balance causes another (im)balance (see right-hand side of Chart 2). At least, if it is assumed that the private sector is running a zero-deficit financial balance, then by Godley‘s “identity,” the government financial balance has to be equal to the foreign sector balance (the latter being the trade balance of the economy).

Moreover, the US government is issuing debt in its own currency; hence, there is no operational risk of default (it does exist, however, from internal political standpoint, as Congress has imposed a debt limit on the US government, which is a self-imposed constraint). Hence, worries about national debt creating “massive deficits” and the cause of the “next crisis” are misguided. The key area to watch in the US economy is the indebtedness of the private sector (households and businesses).

Gauging import tariffs as a means of tackling the US “national debt” load does not take into account the fact that surplus countries (like Germany, China, etc) have more rigid constraints on domestic demand; hence, they are more likely to adjust preserving a surplus status. Of the two countries, China has reduced its trade surplus along with rest of the world quite substantially since the global financial crisis of 2007-08 (GFC), while now, it is Germany that has increased its trade surplus since GFC and is now the world’s largest surplus country (the largest to date for this country by historical standards, although it has stabilised over the past three years).

Now, let us turn back to Godley’s identity of sectoral balances, which is used to depict the US economy on the right-hand side of Chart 2.

It is widely expected that the US economy is likely to face a federal government deficit of a slightly larger size in the coming few years (given tax cuts and additional expenditures styled as the usual pump-priming exercise, which has proved inflationary in the past and not effectively addressing the income distribution pattern). Then, it will depend on the US domestic private sector (outside of the non-federal government perimeter) on whether it will run a larger surplus (implying a lower foreign trade deficit) or a lower surplus or even deficit, which would inevitably imply a foreign trade deficit increase. Hence, it is US domestic private sector (not the US or foreign government) to shape the size of trade and federal government deficits.

Given the current stretched debt position of US households, consumption of which account for sizable chunk of GDP, there could two paths: (1) debt-fueled consumption could continue, hence, saving rate is low and then trade deficit still be following the path of government deficit; (2) consumers could retrench and spend less and save, hence, there could be some reduction of trade deficit while government deficit increases; (3) it could be that first path unfolds initially but then over some time—as households build up debt further—followed by the second one. Consequently, the Fed would reverse the rate path and start cutting the rate target, allowing the mid- and long-term Treasury yields to go down again. Hence, the current upward trend in the US Treasuries yields is rather not a long-term trend.

Indeed, over the past few months, the spread between the two-year US Treasury Note and two-year German government bond rose to 292.1bp as of 21 March 2018, which is a record high since the early 1990s (see left-hand side of Chart 2 below). The 10-year spread has a similar pattern. Some market commentators have been highlighting this yield divergence between the US and the Eurozone’s largest and most-successful economy as s harbinger for near-term US dollar appreciation (i.e., the dollar’s exchange rate should stage a reversal from its recent weakening path; the EUR/USD has moved up 14% to 1.2338 as of 21 March, 2018 from 1.0811 one year earlier).

With regard to the FX view on USD, we have a contrarian view (partially explained above), which is not cemented on the interest rate differential. Here, if some correlation exists between the EUR/USD exchange rate and government yield differential (as data on the left-hand side of Chart 2 may suggest), then our reasoning starts with “correlation is not causation”.

Instead, we base our view first of all on debt positions, which are still substantial both in THE US and Eurozone relative to income. Hence, an accelerated rate increase by the Fed is likely to provoke some kind of slowdown rather than a growth spurt, and the federal government budget deficit increase is likely to be a buffer and not a burden to the US economy.

Secondly, it is Germany’s outsized external surplus (8.1% of GDP in 2017[4]) which suggests the euro’s undervaluation from the foreign trade point of view. In addition, the Italian election outcome indicates that the euro crisis is still echoing, and the Eurozone’s fiscal and monetary setup is a straightjacket for countries like Italy (this also is true for Greece), implying that the intra-eurozone run from weaker countries’ liabilities (in government and banks) into those of stronger countries will still be intact and keeping, for instance, Germany’s government bond yields at quite subdued levels. This in part explains the growing gap between US and Germany government bond yields that has been building over past few years.

All in all, we stick to our previous forecast that the DXY will be still gradually decreasing (in the range of 80-90 points), meaning dollar weakening, as the dollar’s counterparts like the euro and British pound, to name a few, have been sizably weak in the past and are now adjusting accordingly. 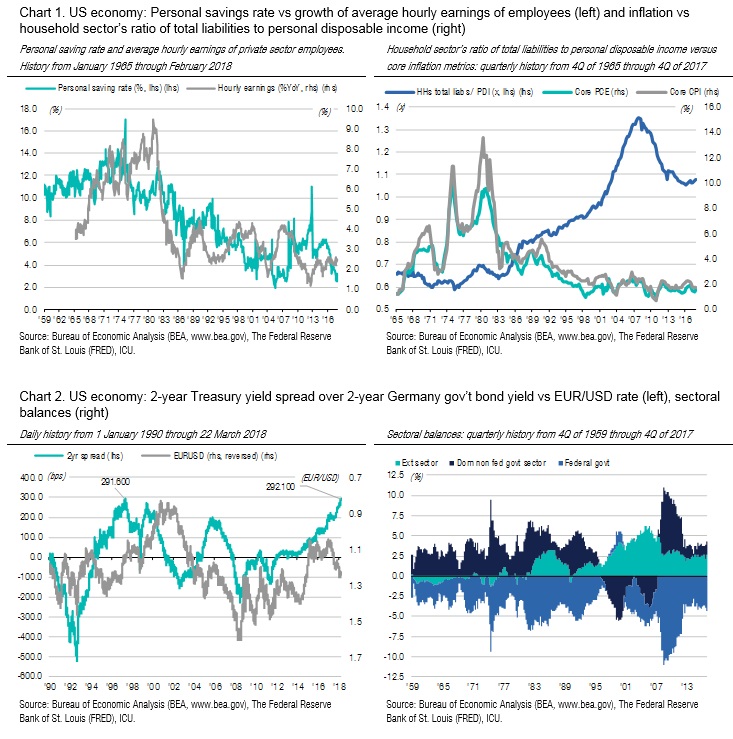 [2] States that the sum of financial balances (receipt minus expenditures) of government, domestic non-government, and foreign sectors are equal to zero. It was first defined by Wynn Godley, a British economist (https://nyti.ms/2nCUSVs).

[3] This was pointed out recently by Gavyn Davis, chairman of Fulcrum Asset Management (www.fulcrumasset.com) and a financial market commentator, in his FT’s op-ed Trump fiscal gamble and the US twin deficits, February 18, 2018 https://www.ft.com/content/e4f1be54-118e-11e8-8cb6-b9ccc4c4dbbb. However, Davis fails to credit Godley for this insight, however, he implicitly acknowledges the endogenous nature of the government budget outcome by saying in the footnote: “Ex post, the budget balance plus the private balance equals the current account balance. This is an identity, and it does not tell us what exogenous shocks are driving the three balances at any given time.” (Italics in this quotation are used by us to underline the key words used by the author).