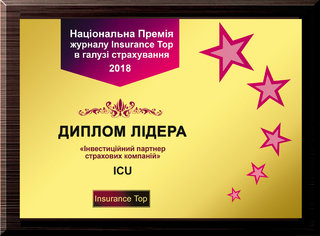 According to Ukrainian Magazine “Insurance Top”, ICU was named the best partner of insurance companies. This is the third such award received by ICU as a result of the annual ranking of insurance market results.

In its annual ranking, the magazine determines leaders and outsiders among insurance companies and their partners in such categories as Insurance Payments, Insurance Payouts, Amount of Insurance Cases, and Financial Results in every type of insurance business, by amount of assets, reserves, income from investments activities, etc.

ICU Group was recognized as a BISL (Bonds of the Internal State Loan) transactions volume leader for insurers in 2017.

As Konstantin Stetsenko, ICU’s managing Partner, noted, insurance companies continued to increase their BISL portfolios last year. “Active increase of insurers’ BISL investments that started in 2016, continued in 2017 for the same reasons. More companies have rated BISL for its high profitability and safety, which is guaranteed by the Ministry of Finance of Ukraine.”

“The annual yield of Ukrainian BISL exceeds the average deposit’s yield of state-owned banks by more than 2%. Hence, insurers transfer available liquidity to domestic UAH bonds with the aim to diversify investments and to increase their profitability. As a result, the amount of insurers’ investments into BISL have increased by 20% and reached UAH 6bn in 2017,” according to Konstantin Stetsenko.

ICU Group has been a member of the League of Insurance Organizations of Ukraine (LIOU) since 2015. It is the main investment partner and a consultant for insurance companies on investment and asset management issues.

“Insurance Top” has been published since 2003, and is the only public source of information on the Ukrainian insurance market. The magazine tracks official statistics of insurers and publishes the results  quarterly.

ICU emphasizes the legality of its government bond transactions